Atheism vs Agnosticism: A Brief Explainer

I had a brief Twitter exchange with a well-known poker player, and realised that he seems to be religious. My default position in any exchange is an assumption that people are atheists. I guess that's because I am one myself, but it also seems to me to be the overall default, given that everyone starts their lives as atheists, with no beliefs about god, or television, or sports, or anything, and it's only through exposure to religious ideas that people become religious. It's why "Christian" countries tend to have more Christians, and "Muslim" countries tend to have more Muslims.

So, I knocked up the following image to explain how Gnosticism (knowledge) differs from Theism (belief) in god(s). I've seen similar things in the past, and the examples are extremely approximate, but it's probably good enough to be able to send people to this link when they ask about my thoughts on it. 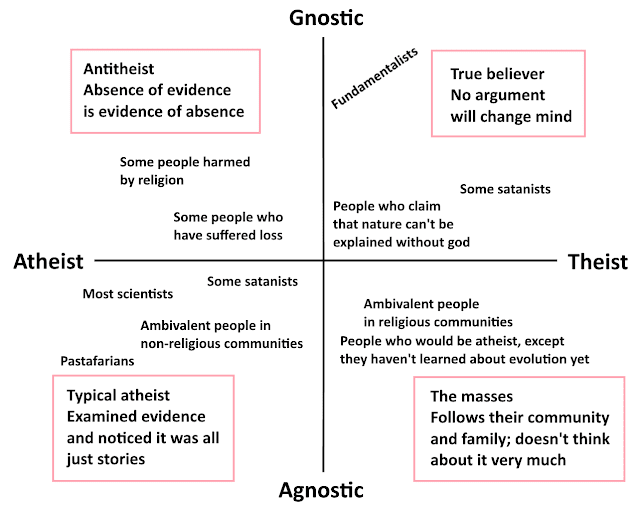 The only other thing to really talk about here is that, unlike, say, the common 2-d political compass (which I find to be too naive), belief and knowledge actually could be drawn on one dimension, because all knowledge is really a subset of belief, and it comes down to what presuppositions a person has. But my presuppositions include solipsism being pointless, and that the scientific method is an appropriate way to understand whatever can be understood, so I'm ok with treating knowledge as categorically different to beliefs, even when some purported knowledge turns out to be false, because it's more reliable than a world in which everyone has their own facts.
Posted by Crafti at 9:46 AM No comments: